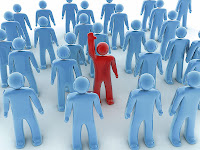 Sales Lead = A prospective customer the salesperson has identified as needing or desiring a product or service.

Prospect=A sales lead that the salesperson has identified as needing or desiring the product or service.

Qualifying=Assesing a prospect’s ability and authority to buy a product.

”We defined a suspect as a potential customer, who had never been called on, where there might be a sales opportunity. Suspects were identified through telephone directories, business directories or similar sources. By the very nature of the identification process, there was no way to know whether or not a suspect really offered a sales opportunity. We only know there was a door waiting for a knock; we didn’t know what was behind it. A prospect, on the other hand, was a known quantity. A seller from Xerox had visited the potential customer so the door had been opened at least to the extent that we could see some sales possibilities behind it.”

Wise Geek
Just like prospecting for gold, sales people prospect for sales leads or customers. Sales leads are potential contacts a seller seeks in order to close a deal or agreement for services or supplies. Sales leads are generally considered the first step in the entire sales process.

A „lead” can be an individual or business who has shown interest in a service. A sales person might seek sales leads out independently or purchase a database that lists leads. The perfect conclusion to a lead is a presentation, sale, or agreement.

For example, an admissions advisor at an online college might call people who have shown interest in the school by filling out a form on the college website. The form information becomes the lead. Forms like this usually consist of a name, email address, mailing address, and phone number. Submitting this information voluntarily makes this person a sales lead.

Once the potential student starts giving the school money for her education, she becomes a student, and consequently she goes from sales lead to sale. If that person decides not to become a student, she remain in the sales leads database and can be contacted again for future interest. Not all leads turn into sales.

Developing sales leads can be done in many ways and is often approached systematically. The purchase of sales lead databases is popular with businesses that thrive primarily on outside sales. These databases consist of a business owner’s name, location, phone number, fax, and any other relevant information. Sales leads are very valuable information, and often demand a high price.

Sales leads can be acquired through word-of-mouth, Internet research, and trade show participation. Lead prospecting can be a full-time career, or just part of the final sales goal. Prospecting is an important element in establishing business relationships.

Wikipedia
A sales lead is the identity of a human or entity potentially interested in purchasing a product or service, and represents the first stage of a sales process. The lead may have a corporation or business associated (a B2B lead) with the person(s). Sales leads come from either marketing lead generation processes such as trade shows, direct marketing, advertising, Internet marketing or from sales person prospecting activities such as cold calling. For a sales lead to qualify as a sales prospect, or equivalently to move a lead from the process step sales lead to the process sales prospect, qualification must be performed and evaluated. Typically this involves identifying by direct interrogation the lead’s product applicability, availability of funding, and time frame for purchase. This is also the entry point of a sales tunnel, sales funnel or sales pipeline.

Once a qualified lead exists, additional operations may be performed such as background research on the lead’s employer, general market of the lead, contact information beyond that provided initially or other information useful for contacting and evaluating a lead for elevation to prospect, the next sales step.

If a sales lead eventually makes a purchase, this is called conversion and a closed sale. The ratio of sales leads that convert is often referred to as the conversion rate, a way to measure the effectiveness of a sales process, sales team, or sales person.

Business Dictionary.com
Definition
Inquiry, referral, or other information, obtained through advertisements or other means, that identifies a potential customer (prospect).


Mitsu Fisher – Inside Sales Professional
We talk all the time about sale leads. But what do we mean? What is a sales lead? What is the definition of a sales lead?

Here’s one I found on Wikipedia:

“A sales lead is the identity of a person or entity potentially interested in purchasing a product or service, and represents the first stage of a sales process.”

You can read the entire description here.

I am a professional in marketing and sales. I am proud of being called a salesman. I am a free man. I am a father and a husband.